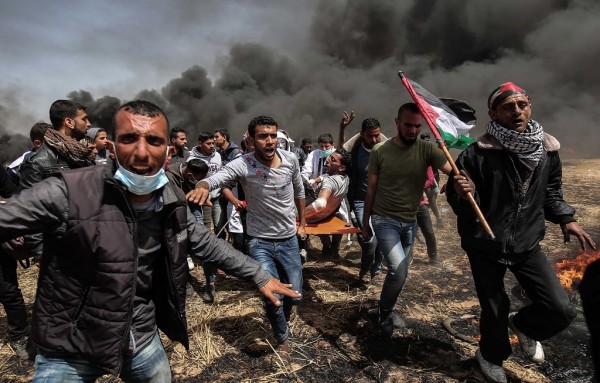 The Insubordinate brings you a brand new way to easily digest our takes on current affairs and breaking news both internationally and nationally with the development of our weekly newsletter, hope you enjoy!

Gaza clashes: Dozens killed ahead of US embassy opening in Jerusalem

“At least 52 Palestinians have been killed and 2,400 wounded by Israeli troops, Palestinian officials say, on the deadliest day of violence since the 2014 Gaza war..”

As the US prepares to move its embassy into Jerusalem in a clear belittlement of the Palestinian people, and arrogance in the face of clear colonial issues, we yet again see “clashes” and “violence” on the Gaza border. This “violence” (Rocks being thrown at walls, and gunfire returned by Israelis) comes as a direct result of weekly protests in the run-up to Nakba, the commemoration of the day hundreds of thousands of Palestinians were displaced from their homes when the colonial state of Israel was founded.

The Israeli army has stated that their troops were operating “in accordance with standard procedures.” Effectively absolving any war crimes or Geneva convention violations, but more importantly, it seems Israel’s “standard procedures” include firing upon large groups of unarmed civilians simply protesting their displacement. Imagine if, during the London riots, we had decided to begin firing upon rioters with live rounds for throwing objects at police, windows, as well as burning cars, stores, etc (which did no doubt cause more damage than “stones and firebombs”) but did we? No, because it is unlawful. It is important though to remember under Israel, Palestinians are subject to martial law. All these clashes are doing is bringing to light the true disdain and dehumanization the Israelis have against the native population of Palestine. As a final point, we refer you to this video of an Israeli sniper shooting at unarmed young protesters.

“Rail service to be re-nationalised temporarily after Virgin and Stagecoach could not meet payments.”

The news we woke up to on Wednesday of the east coast mainline being re-nationalised almost made it seem like the conservatives were finally taking tips from Corbyn’s Labour. Unfortunately after the sensationalised headlines, full and permanent nationalisation was never the goal. Instead, the government is set to nationalise the rail until a more profitable company can be found. That’s right, instead of trying to develop the awful rail service in the United Kingdom for their citizens, they would rather find the next highest bidder who will squeeze every penny out of it. We have seen the same issues arise from the privatised Royal Mail as the market demand for letters is falling and more specified and cheaper courier services take over the parcel sector.

The British railways are almost famous for being late, expensive and often overcrowded as we see on the Southern 7:16 am service from East Grinstead to London Bridge usually carries double the designed capacity and the largest price hike in 5 years as tickets across Britain rise by an average of 3.4%. yet we are still lead to believe that privatisation is the best way to run our rail. That statement is true if you‘re the company that owns the contract. It is time the passengers reflected and thought who the railway truly serves, you or the super rich companies?

Here is a video by Owen Jones with further details on the privatisation of the UK’s Rail network.

“They married in a happy and uplifting service at St George’s Chapel, Windsor Castle”

Instead of glorifying the wedding of the super rich the insubordinate has decided to list events that transpired around the same time as the wedding that deserve the same amount or even more exposure than the wedding. In no particular order: